Add To Cart
Shop Parts For Your Vehicle
View The Exhaust Brakes Collection View Collection
Limited Time Offer
You have qualified for a 10% discount on your order. Act now, this offer ends in 24 hours. Is compatible with Edge or other third-party OBD monitors.

Test runs on a 7% grade in the vicinity of Southern California's daunting Cajon Pass were done with the gear selector in both Drive and 2nd. Tow/Haul mode was used in all cases, per Dodge’s recommendations. 55 mph was established at the top of the hill, and the foot brake was applied only if it became necessary to keep the vehicle at a safe speed (no greater than 65 mph). Multiple configurations were tested: stock, Banks Brake with Computerized Brake Controller and SmartLock® (CBC), PacBrake, Jacobs and BD.

All of the brakes tested were a direct mount configuration. Each of the competitive brakes was controlled by the vehicle ECM (an option that became available starting in the 2006 model year). In addition to road testing, flow bench testing was conducted on each of the brake assemblies. 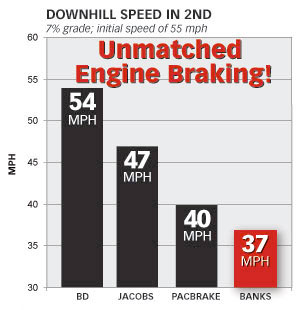 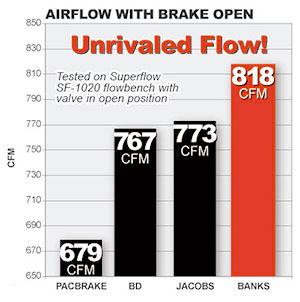 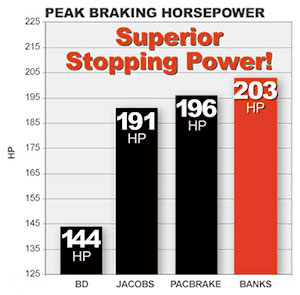 Banks Brake with CBC and SmartLock ® 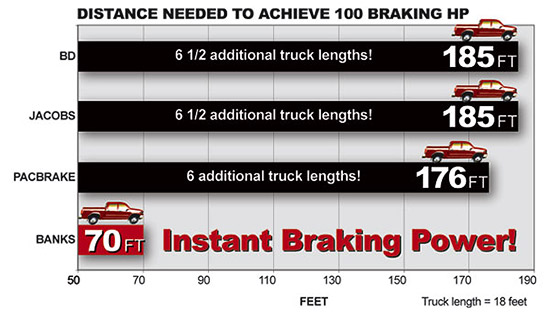 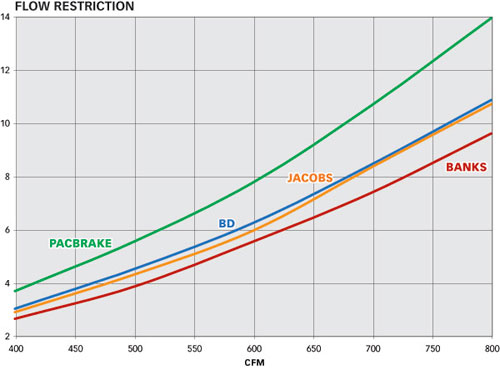 Banks Brake versus the competition

Read what RV Magazine has to say about the Banks Brake!

Does Turbo Diesel Register think the Banks Brake is worth it?